True Fact: This Software Can Help You Avoid Tough Work Conversations (You're Welcome)

As Project Managers—whether that’s your official title or the role you’re playing on a major initiative—it can be annoying and stressful to constantly chase people down, ask why things are late, or point the finger in status meetings. (Unless you’re someone who enjoys the shame game, which is a topic for another time.) It also isn’t fun having to play bad cop as a manager, and repeatedly call out where your employees are running late and/or missing the mark. Not to mention, the time-consuming aspect of finding the evidence required to explain what they probably already know but could push back on if you didn’t have documented proof points.

We’re all in this together, chasing the same project deadline. Neither side wants confrontation or difficult conversations. So, wouldn’t it be nice if you didn’t have to be the one sending reminder emails, calling out at ball-droppers, and nagging about the effects of delayed work?

Let Moovila handle these tough conversations for you by: 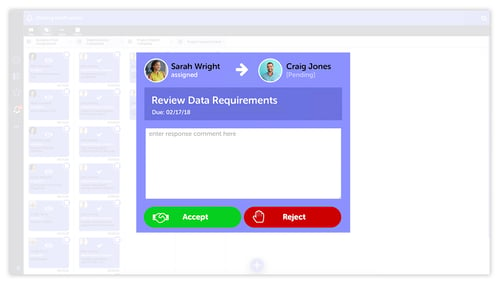 Do people understand what you’re expecting them to do? Better yet, have they agreed to do it? Moovila’s tasks require acceptance from task owners, which acknowledges that they’ve seen the request and have committed to doing the work. This removes the need to ask, “did you see my email about the report I need you to create?” or “have you started yet?”. Task acceptance also allows the assignee to reject a task and with reason, such as “I don’t have enough information to get started” or “I will be on maternity leave during those dates.”

We all need a reminder here and there. But you don’t have to be the one to do it. Moovila automatically sends task reminders when deadlines are approaching, and tasks are late. Users are also alerted when task dependencies have been completed, so they know when the ball is in their court. This means you don’t have to tell teammates when to step up, or that people are now waiting on them. And when work is still running behind, you can send task owners a gentle “nudge” in the platform without having to make that awkward call or craft a firm yet pleasant email.

A little foresight and perspective could mean the difference between delivering on time VS delivering two months late and 20% over budget. Moovila’s Critical Path Engine clearly visualizes the project’s critical path of dependent work, highlighting late tasks and illustrating their effects on the project timeline. You can easily see where bottlenecks exist, who’s causing them, and what the magnitude of the delays will be. So. you don’t have to say who the problem is or what it means for the project; it's clear for all to see. And those who assume “so what, I’m only one day late” will understand their downstream impacts on the project timeline.

Some people are better at managing time than others. But that doesn’t mean you have to be a micromanager. Moovila’s SmartSchedule automatically prioritizes work by integrating with calendars to factor meetings, vacation, priority, risk, due dates, and capacity into the equation of your entire portfolio of work to suggest the most efficient order in which to execute tasks each day. So, you don’t have to tell your employees’ how to spend their days, and they don’t need to ask you what their task pecking order should be. 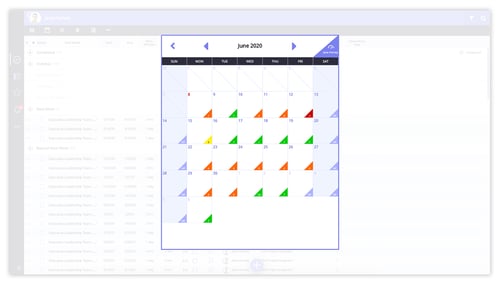 Are you creating false senses of urgency and causing undue stress? When assigning task due dates in Moovila, you can see how busy the assignee is on a scale of green to red each day. This helps prevent you from unknowingly overburdening people by assigning work on their busiest days, and in turn, the person feeling forced to take on more than they have time for, or working overtime on tasks that simply could have waited. Over time, this causes burn out, and, even more uncomfortable conversations.

If providing status updates to executives often feels like a strategic game of “how can I not throw my teammates under the bus today?”, we can help there too. Every time the critical path changes, a snapshot is recorded. That means you can show a history of changes and why they occurred. You can also create customizable dashboards to highlight both wins and risk areas across project portfolios. The good, bad and the ugly is all clear to see. (Don’t shoot the Mooviler.)

...but not to say that technology should replace all communication. Moovila is here to help augment the human work experience so people can get work done. So be sure to keep lines of communication open by having one-on-one conversations and team check-ins to maintain morale and make sure your employees aren’t feeling overwhelmed. Remember, just because their capacity isn’t red, doesn’t mean it feels green.

Want to see a deeper dive into Moovila’s features and learn how we can help your team execute on time? Schedule a demo at moovila.com.